[S]UNY [O]swego [A]RG [P]ackage, or SOAP, is an alternate reality game (ARG) engine. Built on the open source platforms WordPress and BuddyPress, it is a bundle of pre-existing plugins and custom modifications that allow anyone who can install and host WordPress to run “what if” simulations and collaborative storytelling exercises.

SOAP is free software, released under the GPL v.2.0 license. SOAP was created for WordPress 3.5. Because there have been no resources to update the software, we stopped offering the source code.

What is an ARG?

ARGs are open-ended narratives that are collectively played by participants in real-time using a variety of interactive tools converging in one social media environment. Based on that idea, SOAP simulations are exercises in collective storytelling, deliberation and planning in which authentic social issues are explored. This kind of exercise seeks to involve various members of the community in analyzing a real-life problem, articulating a multitude of realistic and possible responses to it, and examining the question of what form action should take after the game. The activity combines an online simulation with face-to-face activities where the experience is discussed and analyzed.

As way of introduction, this slideshow from the osw3go.net simulation will give you a good overview of how a SOAP simulation is structured and everything a participant needs to know in order to take part.

SOAP is designed to run 3 concurrent scenarios, each consisting of any number of acts.

For example, a SOAP simulation about fracking conducted on a college campus might have the following scenarios:

In SOAP, these scenarios are displayed in the rotating picture slider below the website banner.

Each of the scenarios would consist of a number of acts. Let’s assume Scenario 1 is comprised of 4 acts:

When developing the acts, it’s useful to think of them as newspaper headlines. In the above example, these headlines can actually function as the titles for individual blog posts.

In SOAP, acts are displayed and listed in the 3 boxes below the scenario slider. Every time a new act is published, the Featured Image will appear in the corresponding box. Older acts are listed and linked under each box (just the text, without the Featured Image). Note that the most recent comments related to each  act are also listed below the box, in a separate section.

In this day and age when information is easily disseminated and quoted out of context, we have found it is important to have a disclaimer on the simulation website indicating that this is an ARG and that the scenarios are not real.

Additionally, we have found that using leet (replacing letters with numbers) to spell the names of places and people, even if they are fictional, serves as an additional indicator that the scenarios are not real. Thus, we write Osw3go instead of Oswego, or J0hn Smith instead of John Smith.

Participants can shape the simulation in a number of ways:

The simulation can run for any amount of time that is desired. We have found that 4 to 6 weeks is the minimum amount of time for participants to have enough opportunities to review and react to scenarios, attend events, etc. But longer or shorter durations are possible, with the appropriate planning.

A combination of online participation with face-to-face activities is ideal for involving participants in the learning process. See the examples of events mentioned in the case study to get an idea of what kind of activities can be planned in conjunction with the simulation.

SOAP requires that participants attend a specified number of events before fulfilling the Attend goal. The number is currently set to 3 events. Attendance can be tracked by entering user IDs, names, or emails individually or in bulk. One way to quickly collect data that can be imported later is with the iMag PRO scanner and Uniscan iOS app.

In addition to the events that the ARG organizers might plan, another possibility is to allow participants to plan and schedule their own events. For instance, participants can organize their own screenings, and get Educate or Act credit for their efforts.

More information on how events can be scheduled so that they are listed on the Events tab can be found in the How To section.

A SOAP simulation team is usually comprised of the following:

SOAP was created for WordPress 3.5. Because there have been no resources to update the software, we stopped offering the source code.

SOAP was developed with support from a 2012 Innovative Instruction Technology Grant (IITG)  from the State University of New York’s Office of the Provost, plus additional support from SUNY Oswego. The programming was done by Ithaca Content Architecture and Design.

For more information on ARGs, you may want to consult Wikipedia and the Resources section at the end of this page. Jane McGonigal’s book, Reality is Broken, is also a good resource to learn more about the gamification of learning. Other resources are listed below: 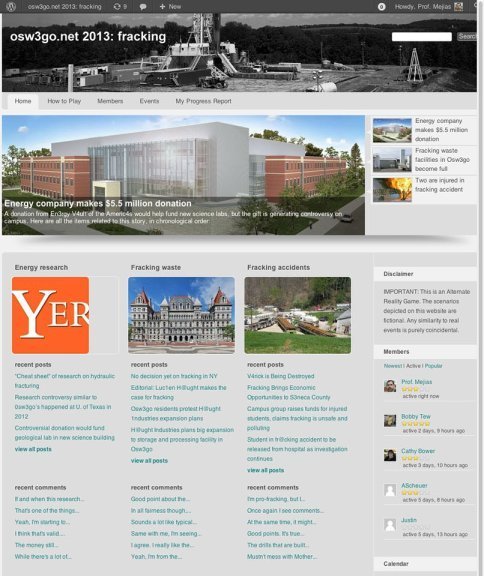 Osw3go.net is a parallel universe to Oswego, New York. Specifically, it is an alternate reality simulation. But the participants in Osw3go.net do not inhabit a virtual world where they control anonymous avatars. Rather, they play themselves in the game, interacting with other real members of the Oswego community, and learning about real local and global issues that impact their community.

Osw3go.net simulations have been conducted since 2008, each time exploring a different theme. The ‘alternate’ realities considered in past simulations have included budget cuts to SUNY, racism on campus, the local impact of US-Mexico relations, Islamophobia, and most recently hydraulic fracturing or fracking. During the simulations, students respond to a number of scenarios, accessing resources in order to inform their participation and shape the development of the story. Students also participate in events, or organize their own events.

Osw3go.net 2013 attracted around 70 players who posted a total of 346 comments. While Osw3go.net 2013 was offered as a 2-credit course, most players joined the game on a voluntary basis.

The following slideshow was used to introduce participants to osw3go.net 2013. It describes the registration process, basic functionality of the website, and how to achieve the goals of the game.

Note: Leet (substituting letters for numbers) is used throughout the game to reinforce the fact that the scenarios are not real. The osw3go.net web site  also contains prominent disclaimers to this effect.

An “act” with new information about each scenario was posted roughly every week, as were additional posts outside the scenarios with news, updates, announcements and reports from guest writers.

In addition to participating in the online environment, players had the opportunity to attend a number of on-campus events during the 6 weeks of the simulation (attending 3 of these events unlocked the Attend goal).

Students also organized their own events, which included film screenings, talks in community organizations, and discussions with campus clubs.

The following assessment was conducted by a party not affiliated with the project.

After reviewing both the quantitative and qualitative data, the following conclusions were drawn:

Review of the post-game data showed all 16 participants who completed the post-test and exit survey completed the first goal: participate. Data for the 4 remaining goals follows:

When asked whether or not their personal opinions on fracking had changed, there was a mix of responses. Very few students admitted to an attitude change, and in fact, several said their views were reinforced. The most consistent response was an admission of increased knowledge and awareness of the issue. Some participants also stated that they had no prior opinion on the issue, felt more informed now, and recognize the costs and benefits of fracking. Again, nearly all post-test participants stated their knowledge of fracking increased tremendously. One student in response to the question “did your knowledge about the issues addressed in the game increase?” stated:

Absolutely, I learned basically (sic) everything I know about hydrofracking from this class. Since this is a topic that is happening as I go through my college experience, I feel like it is VERY important to have a knowledge and understanding of this.

Many participants also stated they will stay more informed about the issue because of the game.

Their suggestions for improvement included selecting an issue more important to college students, clearer explanations of how to “win,” starting the game earlier in the semester since many participants indicated they felt the game lost momentum as the end of the semester approached, and lastly, to include some “real world” components to balance out the virtual world. Finally, while few participants reported they would take-up full-blown activism related to fracking, many reported they would stay informed of the issue.

“I had barely any knowledge on fracking before this class, and now I can happily say I can tell people what fracking is, what it does, and the effects/costs.”

“I was pro-fracking before, and I still am pro-fracking now. I feel that I am better informed about the process now than I did before though.”

“Because my knowledge on hydrofracking has grown so much, I would say my opinion has definitely changed. For the most part I consider myself to be an ‘environmentalist’, so I’ve always just been opposed to fracking. I still am opposed… mostly. Now, I understand how hydrofracking potentially pollutes water supplies and how dangerous accidents can occur without appropriate regulation, so I feel much more comfortable saying that I don’t necessarily support it. However, I also understand how many places have benefited economically from fracking, and why fracking is more feasible than many other energy sources, so after participating in osw3go.net, I certainly understand the other side of the argument (although I still believe that the costs outweigh the benefits).”

SOAP was created for WordPress 3.5. Because there have been no resources to update the software, we stopped offering the source code. For questions about the project, contact Ulises Mejias and Gary Ritzenthaler (first names dot last names at oswego dot edu).