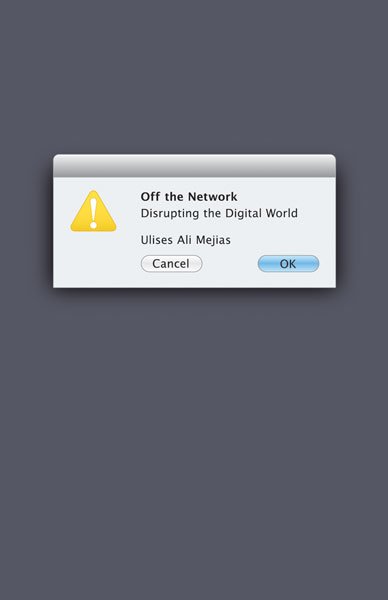 My book Off the Network: Disrupting the Digital World is now available from the University of Minnesota Press. You can pick up a paper copy from your favorite bookseller. Thanks to both Minnesota Press and SUNY Oswego, the book is also available in an open access format, so you can read or download the whole manuscript.

The book presents a critical examination of the digital network as technological template for organizing and determining society, and considers various motivations and strategies for disidentifying from the network.

The work lies at the intersection of the areas of critical internet studies, network science, philosophy and social studies of technology, and the political economy of digital media. It asks the question: How do digital networks include and exclude modes and meanings of sociality? In response, it argues that the more monopolies (a market structure characterized by a single seller) control infrastructure and access to social media, and the more monopsonies (a market structure characterized by a single buyer) control aggregation and distribution of user-generated content, the easier it becomes for authorities and corporations to determine the meaning of sociality and to control the creation of public spaces. In essence, I argue that one-to-many communication is not giving way to a utopian many-to-many communication (much touted in liberal discourses about the internet) without first going through many-to-one mechanisms of control.

The book situates the digital network as part of a media economy that reproduces inequality through a hegemonic–yet consensual and pleasurable–culture of participation. To support my thesis, I consider the politics of inclusion and exclusion of the network. In order for something to be relevant or visible within the network it needs to be rendered as a node (a phenomenon I refer to as “nodocentrism”). Thus, digital networks are constituted as totalities by what they include as much as by what they exclude. While analyzing the disparities this produces, I also posit that the outsides of the network are the only sites from which it is possible to resist its organizing logic. This entire discussion is developed against the backdrop of the main themes of the book: the digital network as part of a capitalist order that reproduces inequality through the commodification of the social; the emergence of a network logic, or episteme, that organizes knowledge according to a nodocentric viewpoint; the hegemonic and consensual nature of participatory culture; the limits of current models of countering networks with networks; and the motivations and strategies of unmapping as a process of generating difference and disidentifying from the network.

I make this argument in three steps. First, I review the scientific and technological framework for how we think or conceptualize the digital network. I then dissect the network’s economies of participation and the models of agency it gives shape to. Next, I un-think the network by questioning the way it determines various practices like socialization, collaboration, activism, surveillance and warfare. Finally, I make a proposal for intensifying the network by making its logic obsolete, opening up spaces for imagining new identities and ways of relating to networking technologies.

This site uses Akismet to reduce spam. Learn how your comment data is processed.